positioning your brand in Africa

Telling your story and positioning your brand in Africa

Africa is a fast-growing market, one that offers immense growth opportunities for its local and international investors. The last ten years has seen an upswing in the number of investors that are making Africa their next investment bet.

So, how should foreign investors position their brands in Africa what are the basic consideration to take into account?

Not a one size fits-all

Most investors come into Africa with an all-encompassing Africa strategy and believe it will be applicable across the board. Africa is not a country. It is a continent with 54 countries all of whom have different regimes, policies, cultural differences, levels of development and in some instances main language of communication.

It is therefore an unspoken rule that investors need to have market specific and region-specific strategies of positioning their brands in Africa. Angola is vastly different from Nigeria and South Africa for example.

Telling your African story in a way that demonstrates how your investment is contributing to Africa’s or the respective country’s growth plans is key.

Gone are the days when companies would focus their stories on being the best in the respective fields and gain traction and recognition.

Africa’s markets are wanting more stories that articulate “the what is in it for them” in terms of development for example of skills, small medium enterprise, innovation, investments, job creation etc. Purposeful storytelling and audience centric communications were also the key take-aways from the recent EMG Communicator Summit.

Focus your stories on articulating your contribution i.e. achievements or accomplishments that has been done versus the promises of what is yet to be done.

Ensure your stories are shared widely with all stakeholders through one on one stakeholder engagements, media leveraging, thought leadership and participation in industry events.

Lastly having a presence on the ground with offices and a local leadership team is key. There is no faster and more strategic way to unlock the opportunities and contribute to social challenges that integrating your company’s brand with the community or target market it serves.

The media also referred to as the fourth estate wields a lot of power and indirect influence on society in Africa. Knowing how to build relationships with the media, work with the media to tell your story and own a significant voice in the local narrative is key. The quality of storytelling varies per market.

So… Who are the media players in Africa?

The main media players or owners of mainstream media platforms in Africa are the government, private business owners and international news wires.

The majority of the media is still owned by government and is predominantly used as a platform to disseminate general news. This would include more traditional media platforms such as radio, television and newspapers. The advantage with state owned media is that in most instances they have the highest reach of the population. The disadvantage of state owned media is that they are generalists in their reporting and not specialists in any subject matter.

They are largely seen to be state machineries that push out news stories that promote the government of the day.  This perception is stronger in some and weaker in other markets and is largely influenced by the country’s governance perceptions of the day.

The second biggest owners of media are private investors who have identified a niche in specialist media and provide specialist publications that focus on business, sports, innovation etc.  Most of the business publications are local and in recent years we have seen the emergence of more pan Africa focused media outlets such as CNBC Africa, Forbes Africa Magazine, Africa Business Review, etc.

These are the publications that are widely read by business people and decision makers in the various fields. They are more high-end and perceived to be balanced and authentic. Most businesses invest in building relationships with these media houses in addition to general media depending on the relevance to their business.

Here is a link to various examples of how some of our clients leverage our good relationships with media to tell their localized stories.

Privately owned media has also introduced a lot of reputable online media platforms that have a huge following and subscriber base.

Specialist media has also been at the forefront of introducing the concept of Thought Leadership events that bring stakeholders together to deliberate on topical issues. This could be through panel discussions, conferences, round table discussions.  These are some of their flexibility elements that make them attractive to main stream business as partners in storytelling. A good example is a panel discussion that we hosted early in the year in partnership with CNBC Africa for one of our clients Minet Africa Holdings. The discussion brought together African captains of industry and discussed why “Africa’s investment should emanate from Africa” looking at the role that African businesses have to play in growing the continent’s economy.

The third type of media owners are the international news wires who are local bureau office of big international media houses such as CNN, Reuters, BBC, etc.

In the main they are perceived to be non-African and referred to as foreign media and are largely blamed at times for sensational and inaccurate stories that are reported about Africa to the world. This perception, whether true or not has a big impact on how local businesses warm up to news wires.

Their role is predominantly seen as partners in promoting Africa to the world but the partnership must and should happen in our terms, which is hardly realistic.

These are opinion leaders who have amassed a huge following and push out content that is of interest to them and their followers. They have become a big trend in the bigger and fast-growing economies such as Nigeria, Kenya and South Africa.

Bloggers are mostly followed by the young leaders in society and their style of reporting is laid back, factual and in some instances probing.

The last medium is social media

An estimated 350 000 000 Africans use social media. Although it is not an official media platform, social media is big in Africa and its content is widely seen as authentic and independent. Companies have had to contend with the reality that social media cannot be dismissed as a fad as it has proven to have longevity and a big impact on reputation of companies especially those that are into the individual consumer space such FMCG companies.

By Thuli Phiri, Founder and Managing Director, The African Storyteller 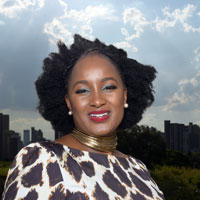