On November 20 we hosted our annual EMG Asiacom partner and client conference. The conference brought together keynote speakers and delegates from clients, agency partners and the media to present and debate on the theme of Communicating Value in a Rapidly Changing Market.

On the same day, EMG also officially marked its 10 year anniversary in China with celebratory festivities held simultaneously in both Shanghai and the Netherlands.

Much has changed in the B2B PR industry over the course of the past decade in China and around the world. "When we opened for business with just two people in Shanghai we were entirely focused on delivering China media relations services for our European and US based client, with budgets and decision-making driven from outside of China," says John Gallagher, International Development Director at EMG. "Today, our team of 25 communicators across two offices in Shanghai and Beijing work predominantly with local China based client contacts, with local budgets and decision-making, and many of these client contacts have a wider Asiatic regional responsibility."

Reflecting this trend, Frank Zhang, Associate Account Director at EMG's Shanghai office was in Europe earlier in November to meet with global clients. Frank spent a couple of days at EMG’s head office where he took the opportunity to update the team on the changing world of Chinese online, print and social media. "While the basic tools and channels are universally similar, I think the team in Europe found it interesting to learn about the particular differences in China, to know more about what is currently hot, what is not used, and to understand generally how the media work," says Frank. 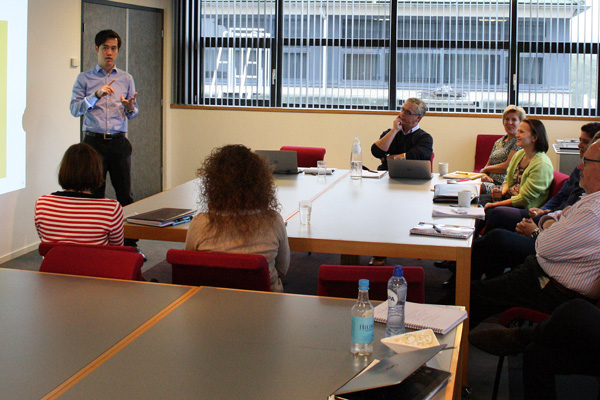