Building a social media presence organically takes both time and commitment. So, when Nicole Kipping from Trelleborg Wheel Systems wanted to promote the Industrial & Construction Tires business as part of growing the company’s overall presence, she came to EMG.

Working together, we developed an initial plan of action to create 4 topics per week covering four areas that Trelleborg wanted to address: news and events, application expertise, thought leadership, and service excellence. We ran this for the first quarter and then reviewed the process with Nicole. While the initial results were positive, with both number of visitors growing fast and good engagement, the rigid calendar we had initially defined was proving difficult to maintain.

As a result, we changed our approach to one focused around themes such as safety or corporate social responsibility. These were still linked to the four key communication topics. But by creating a set of topics around a theme, rather than a set for the week, it gave the Trelleborg team more flexibility in posting the topics. Creating a set of topics was also beneficial to the writers working on the project, allowing them to create a complete set of topics at a time, rather than having to ‘re-invent the wheel’ every week to create another post on an existing theme.

Addressing the audience is critical for successful social media engagement. By tracking the visits, we could quickly see which topics were trending well on which platforms. Unsurprisingly, more personal topics tend to work better on Facebook, while the more company and product oriented topics do better on LinkedIn. Tying topics into other events has helped boost engagement. For example, the #safetember posts around safety were picked up by Fork Lift Truck Association which was running a campaign of fork lift truck safety in the UK. This theme was also more widely shared as many of the hints and tips were useful across the tire industry, not just the construction market. 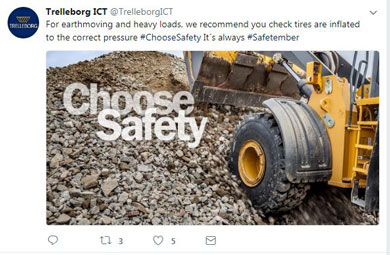 The project has now continued into 2018 and results from the end of last year show a steady and continuing growth in subscribers and engagement. LinkedIn is performing the best with around 65% growth month on month. This is in-line with the company’s targets. It is also where the target audience is most likely to be active and also reflects that, until this year, Trelleborg had not been very active on LinkedIn. The number of Twitter followers is also growing fast although engagement is lower than the 2% target, so we will be looking at how to boost that in upcoming themes.

Facebook is lagging a little behind initial projections, but this could be because the focus of the posts has been more on the B2B audience. To address this, we are looking at possibly doing some more personal themes targeted specifically at this channel. Engagement tends to vary depending on the theme, with topics such as #safetember performing well, while others struggle to meet the target of 7%. And finally, Trelleborg is now already posting around six topics per week rather than the initially proposed target of four, so we see that the more flexible themed approach is working well.

“Regular reviews are critical to the success of ongoing projects like this one”, comments Nicole. “They enable us to see what is working well and what can be improved. That allows is to adapt the themes and approach to better address our audience.” 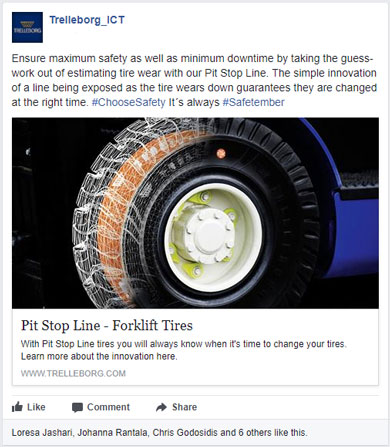